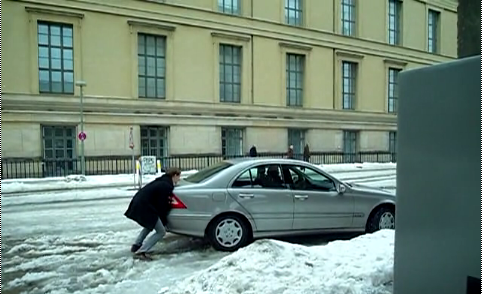 A common sight in Berlin, February 2012
Link to video:https://routes-routines.constantvzw.org/wp-content/uploads/2012/08/SDC12760.ogv 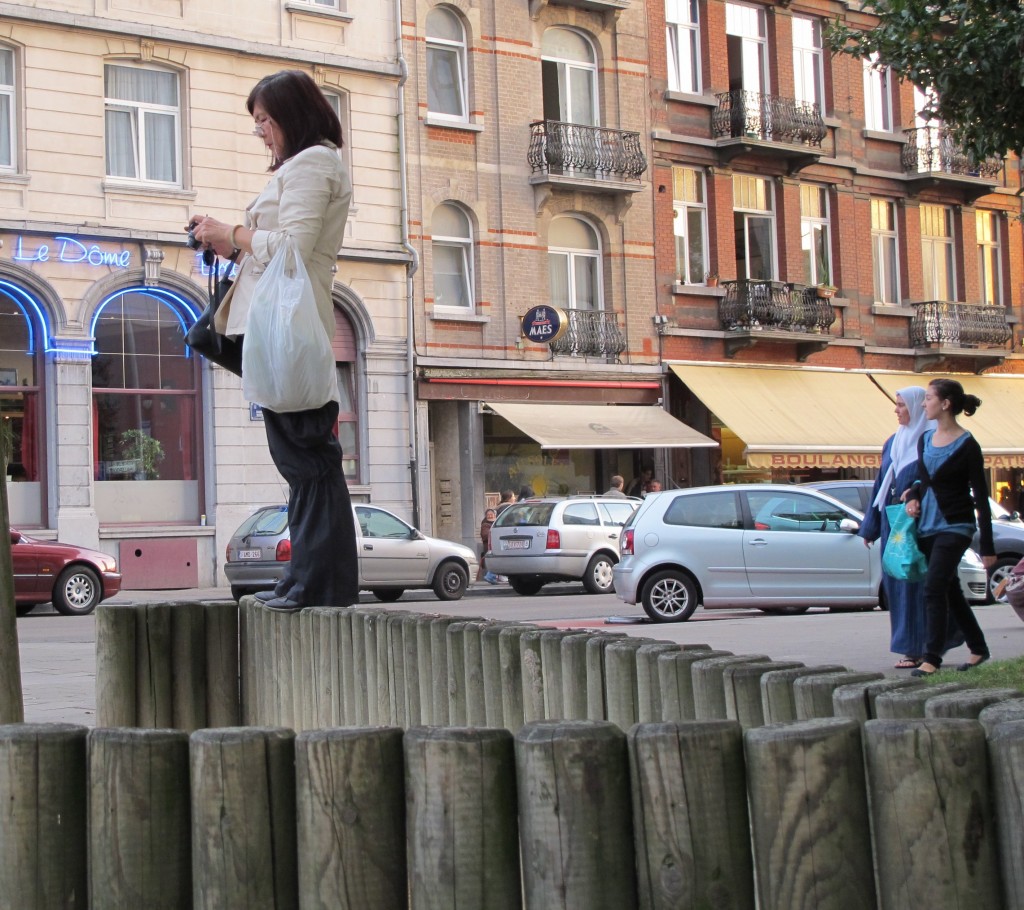 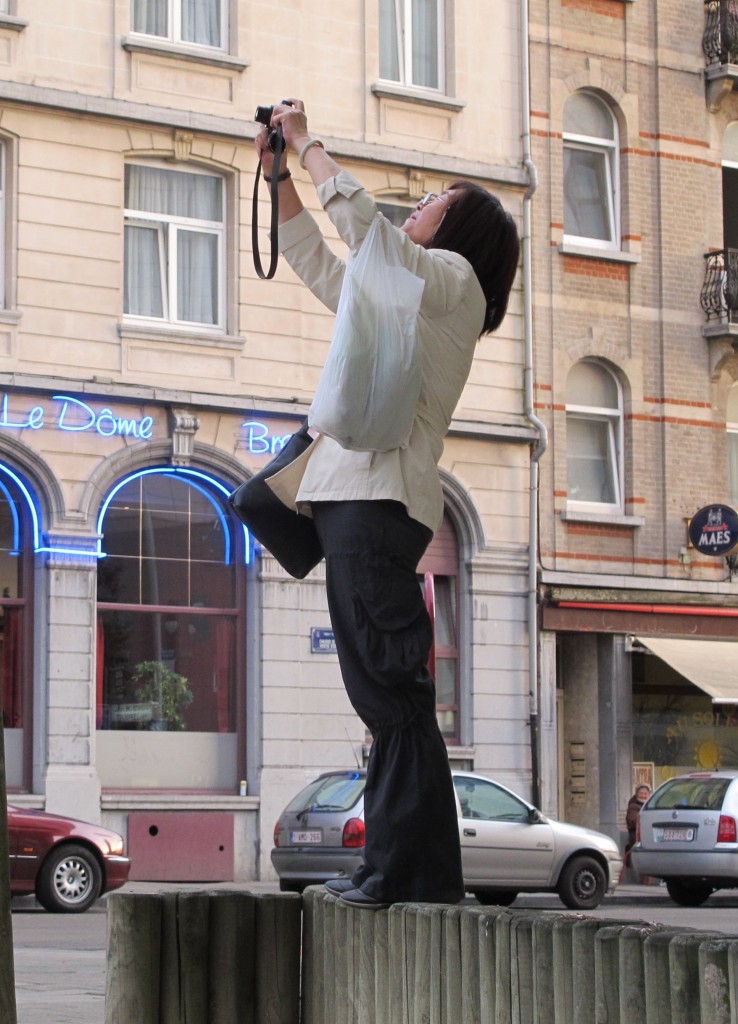 Pictures from a rainy but beautiful exploration celebrating Laïa’s birthday, chasing the remaining traces of railroad tracks on the huge site of Thurn and Taxis in Brussels. The site is since a few years under construction, the main buildings of this former deposit and transition site have been converted to offices, conference and exhibition halls, the backland is still terrain vague. The ruins of service houses on the site are under water, the site has been heightened with a meter of new sand resulting in a bad drainage and huge mud pools. On our walk we found several looted bags, empty wallets, bankcards, a drivers license. There are three viaducts crossing the lot, you can enter into one of the pillars: it contains a huge vacant space, probably a former storage or workspace related to the railway activities.

Here you can find more images

Garnet Hertz is working on a doctoral dissertation in Media Theory & History based on the “The Dead Media Handbook” as initially proposed by Bruce Sterling in 1995 in his “Dead Media Manifesto” (http://www.deadmedia.org/modest-proposal.html).
His plan is to actually publish a book, taking into account, and using the work, notes and collections assembled on Deadmedia.org

Hertz’ curatorial vision on the project is to “dissect the topic of “new” media from an engaged historical, theoretical and technical perspective. At its basis, this project assumes that changes/revolutions in communications technologies are a liquid but consistent cycle. Although inconsistencies and true revolutions do occur, this project will not focus on these: instead, common threads and trends will be explored. “The Dead Media Handbook” is a field guide in the world of hype.”

“As a response to the hype of the internet, CD-ROMs and VR systems of the day, Sterling saw that an archaeological media-analysis was required of earlier mediaforms to gain a wider perspective on “new” media. “Plenty of wild wired promises are already being made for all the infant media. What we need is a somber, thoughtful, thorough, hype-free, even lugubrious book that honors the dead and resuscitates the spiritual ancestors of today’s mediated frenzy. A book to give its readership a deeper, paleontological perspective right in the dizzy midst of the digital revolution. We need a book about the failures of media, the collapses of media, the supercessions of media, the strangulations of media, a book detailing all the freakish and hideous media mistakes that we should know enough now not to repeat, a book about media that have died on the barbed wire of technological advance, media that didn’t make it, martyred media, dead media. THE HANDBOOK OF DEAD MEDIA.”

Three years ago, a crew of four people quietly launched the South Korean “citizen journalism” Web site OhmyNews. Since then, its staff has grown to 53, and the number of “citizen reporters” writing for the site has grown from 700 to about 26,700, with about 1 million readers each day. Its experiment with grassroots-led journalism has transformed Korean politics. (1)
END_OF_DOCUMENT_TOKEN_TO_BE_REPLACED

Utopias sprout from dreams of ultimate harmony in which there is little space for friction, otherness or protest. Various ideological Utopic projections continue to exist in texts, visuals, thoughts and desires, but the reality of a fast growing global urbanisation is far from ideal and comes with many problems; it is calculated that in the next fifty years, two-thirds of humanity will be living in towns and cities. A major challenge is to minimize poverty in cities and improve the urban poor’s access to basic facilities such as shelter, clean water and sanitation.

UN-HABITAT; The United Nations Human Settlements Programme is the United Nations agency for human settlements. It is mandated by the UN General Assembly to promote socially and environmentally sustainable towns and cities with the goal of providing adequate shelter for all.
END_OF_DOCUMENT_TOKEN_TO_BE_REPLACED

There Is Nothing Wrong in This Whole Wide World 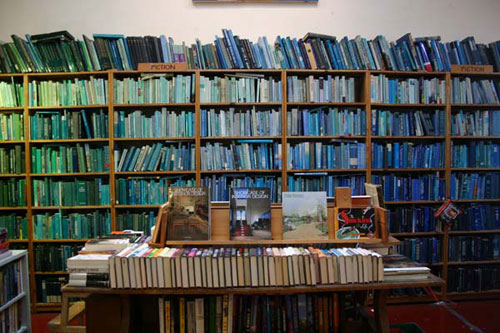 San Francisco based artist Chris Cobb re-arranged a bookshop according to colour. The installation ‘There is nothing wrong in this whole wide world’ paints a harmonic literary rainbow, integrating 20.000 books in a visual esthetic formula.

On a sunny sunday afternoon Femke, Nicolas, Laurence and I visited the Mundaneum in Mons; the museum which hosts the index to the collections of Paul Otlet.
END_OF_DOCUMENT_TOKEN_TO_BE_REPLACED