Utopias sprout from dreams of ultimate harmony in which there is little space for friction, otherness or protest. Various ideological Utopic projections continue to exist in texts, visuals, thoughts and desires, but the reality of a fast growing global urbanisation is far from ideal and comes with many problems; it is calculated that in the next fifty years, two-thirds of humanity will be living in towns and cities. A major challenge is to minimize poverty in cities and improve the urban poor’s access to basic facilities such as shelter, clean water and sanitation.

UN-HABITAT; The United Nations Human Settlements Programme is the United Nations agency for human settlements. It is mandated by the UN General Assembly to promote socially and environmentally sustainable towns and cities with the goal of providing adequate shelter for all.

One of UN-HABITAT’s current projects is The Global Campaign for Secure Tenure. This campaign is an advocacy instrument designed to promote security of tenure for the poorest populations, especially those living in informal settlements and slums, with the goal of making a significant impact on the living and working conditions of the world’s urban poor. The Global Campaign for Secure Tenure encourages negotiation as an alternative to forced eviction, and the establishment of systems of tenure that minimise bureaucratic lags and the displacement of the urban poor by market forces.
The Secure Tenure Campaign recognizes slum dwellers and their organizations as genuine partners, and seeks to promote their partnerships with government at all levels as essential tools for the upgrading, planning and management of cities. The Campaign strengthens partnerships and builds upon existing local initiatives such as slum upgrading, national legislation reform pertaining to urban land, civic education, and capacity building. . It also serves as a strategic entry point for upgrading slums, regularising informal settlements, and promoting affordable shelter policies.

UN-HABITAT and the Canadian government are now preparing for the 3rd World Urban Forum, a meeting that will bring together public and private institutions, experts and decision-makers from around the world to discuss the key urban challenges facing the world today. The purpose of the Forum is to engage people in discussions about urban sustainability and to create significant change across generations in the field of sustainable development. The forum will take place in Vancouver, Canada, from 19 to 23 June 2006.

In preparation of the World Urban Forum, a number of papers are commissioned in which the future of urbanisation is contextualised. Dr. Rhodri Windsor-Liscombe of the Department of Art History, Visual Art, and Theory at the University of British Columbia contributed The Ideal City, an illustrated paper about the history of urban idealism. The paper can be found online in PDF format, in both English and French.

The Ideal City is a collection of ideas, positions and mentalities that have been developed throughout history in respect to Ideal City planning and Utopian thought. It provides the reader with an extensive bibliography on the topic, and argues that “imaginary speculation provides insights and potential strategies for the creation of a sustainable, livable and resilient city for our times.” *

As if responding to Lewis Mumford who declared in The Story of Utopia (1922) that “A map of the world that does not include Utopia is not worth even glancing at”, the writer sets of on a mission to complement our cartographic knowledge of the world with the images and projections of unbuilt cities and unknown dreamworlds that nevertheless have helped shape contemporary urban ethics and esthetics.

“The Ideal City stands at the intersection between imagination and experience, where the mind reconstructs ordinary living into harmonious community. It is a virtual place that can correct or change what seems deficient in contemporary conditions by recovering the effective in past practice and revealing previously undefined improvements in organization and appearance. It is an expression of exasperation and of hope. It confirms the power of thought over material state and of aspiration over convention. And it demonstrates that ideas are inseparable from technique and ultimately concerned with the practical. The Ideal City intends pragmatic improvement just as much as the betterment of the individual citizen and of civic society.
( … ) The famous definition of the city voiced with the greatest force by the ancient Greeks including Plato, Pericles Lycurgus and Thucydides, and often paraphrased as, “The strength of the city lies not in its walls but in its people.” reminds us that the solution to our current worries about terrorism or criminality, contagion or environmental degradation cannot be found in structure or system alone.”

It is unlikely though not entirely impossible that the regressive position taken in this matter by the New Urbanism and Smart Growth movements in America, and by many traditional conservative styles of urban development in Europe would be welcomed by the ancient Greeks. 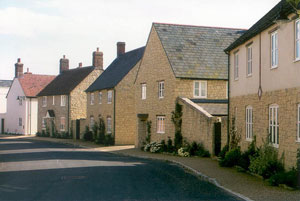 It was the Prince of Wales who in 1993 initiated the creation of Poundbury: a model English village connected to Dorchester following the ten principles for tradional building Prince Charles had formulated in his book A vision of Britain in which he gives his idea of the future of the Kingdom he will one day rule. Here we can read that “a sense of pride and a feeling that everyone contributes to the planning and organisation of the place” is essential to a succesful neighbourhood. The supposition of Poundbury is that the walls of tradition guarantee continuity, safety and peace.

The website of The Prince’s Foundation (“an educational charity which exists to improve the quality of people’s lives by teaching and practising timeless ways of building”) reads: “If we want to build places for people, then it follows that we must put people’s needs, aspirations and feelings at the very heart of the design process.” Poundbury, however was not designed, constructed and built out of the people’s need and feelings, but as an architects answer to specific stylistic guidelines given by the Pince himself who declares that “people will only buy what they need, and think is good” and because property in Poundbury is sought after and popular, this proves his point.

“Disneyland, however crass to some, daily attracts countless numbers of almost all the world’s population to its saccharine utopia. Disney themes include elements of the Ideal City and especially the transitory impression of security, community, enjoyment and commonality. Although lacking the serious ethic of the utopic, the Disney model alike plays against contemporary reality, touches on the ideological and theological realms as well as instituting a kind of better life. The level of explicit and implicit control, plus the removal from the habitual, are remarkably close to More’s Utopia, and its recurrence in the writing of Andrae, Bacon, Campanella or Cabet. And to many, such features coincide with the dystopias narrated by Butler, Wells, Orwell or Skinner. The chief difference, and one of tremendous significance, is the absence of a vision for environmental and communitarian improvement in which the individual citizen achieves quality of life that diminishes egotism and acquisitiveness.

The city is thus always as much imagined, imaged, written, spoken as planned, built, altered and experienced. It is the real construction of mental constructions; it is the happenstance consequence of conscious composition and/or its absence; it is the tangible fabric from the intangible fabrics of political, economic, legal social and cultural interchange; it is always emerging from backward and forward-looking speculation; it is the enterprise of passionate individuals wanting to bring into being pleasurable society. And, it is the result of sectional as well as opportunist social and economic forces and self-seeking groups and individuals. “If I could wish for something, Søren Kierkegaard wrote early in the 19 th century, “I would wish for neither wealth nor power, but the passion of possibility; I would wish only for an eye which, eternally young, eternally burns with the longing to see possibility.”

* Two other papers were produced by the International Centre for Sustainable Cities. The Capable City and The Livable City are both available in English and French.