Green dress, mobile phone squeezed between shoulder and cheek, staring in the distance.
â€œI am telling you: if we develop a sufficiently powerful theory on the micro-level, it will unlock secrets of large scale macrosociological changes as well .. Yes call me old fashioned … call me anything you likeâ€
â€œHallo mevrouw, vervoersbewijs alsjeblieftâ€
She tries to wave off the train conductor who is asking to see her ticket.
â€œI don’t know .. I just moved to Belgium, but as soon as we arrive we will find out .. â€

What are the chances of being on a train and the woman who takes the seat next to you talks for two hours straight on her mobile about micro-sociology?
The train makes a teribble noise, I am picking up bits of the conversation while checking out a book I just bought: â€œYou are here, Personal geographies and other maps of the Imaginationâ€ by Katherine Harmon. A collection of psychedelic urban projections, imaginary mental maps, schematic idealistic places viewed from extraordinary perspectives, geophysic cartographies. Highly seductive and absorbing.

â€œA theory of interaction rituals as preached by your mr Collins and his patriarchal line of pseudo situationist sociologists is not only far fetched, but does not lead to a better understanding of where we come from and why we are here, on our way to God knows whereâ€
She pauses, probably to hear a counterargument. 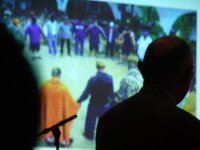 I stare at a drawing by Chukchi indigenous Siberian people which maps out paths to dreamed destinations. The roads lead to middle earth, the heavens, to the underworld, to dawn and night. The map is 19th century and uses notations that are collectively understood to guide others in their dreams and prevent them from becoming lost. It’s a great concept. Inbetween the lines, stars and people on the map there’s a voice ringing through. It speaks to me on a didactical tone. It speaks about structuralist anthropologist Lévi-Strauss. Why? I can only guess. The voice takes a breath, I turn the page and it begins a new paragraph:

â€œLévi-Strauss came to hold that the grand unifying system is a set of elaborations from binary oppositions. He embarked on a search for the code of all codes. Formal parallels among the elements of myths and their combinations and oppositions in particular narratives can be interpreted as a code organized on binary dichotomies. Myths structure the world into categories of what goes together and what is opposed.”

I flip another page, and look at a colourful map drawn by Turkano Indians. After ingesting a potion prepared from narcotic plants, these Amazon indians guided by shamans, experience ritualistic visions.

The voice: â€œWe can take ritual as the missing link between group structure and group ideas. Rituals are the nodes of social structure, and it is in rituals that a group creates its symbols.” 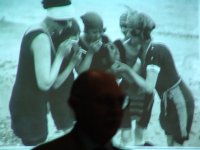 The woman: â€œI bet mr. Collins would not know what to think about non physical group assemblies on the web; even when used daily by zillions of people to get together and communicate the internet as a public arena has not yet entered the research of sociologists studying Interaction Rituals, simply because they will claim a gathering on the web is less ‘good’, that co-presence of people should be ‘bodily’ in order to file as a condition for rituals to take place. … How is Maria doing?â€.

â€œIn the fifties, in the midst of a fight with his neighbours about the exact position of the border between their gardens, Lévi-Strauss embraced a methodology in which no longer ideas correlated to types of society, or even to the context of social action, but were finally compared to each other. Dropping interaction rituals, leaving the system of symbols as the object for analysis. The dispute between neighbours had something to do with two trees, bearing loads of fruit on the edge of the two gardens.”

Although the map looks like a childs’ drawing of a crossroad seen from above the caption explains that the central image actually involves ferility.

â€œ … As I said before: I don’t go with your ‘every day has its dog’ kind of thinking. .. Yes I know you think I am conservative .. but subjects do not only embark on situations which would exist with or without the subjects presence. It is the situation that arises from a meeting of subjects. … Yes, .. no. No subjects; no situation. That is what I say. Let’s show solidarity with the poor dog and for Gods sake let him have his dayâ€

The caption to the drawing explains that at the ‘crossroads’, a vagina is being depicted, which is being approached by drops of semen: represented by little red and blue dots which resemble cars in heavy traffic. Next page:

â€œIn his structuralist approach to anthropology Lévi-Strauss proposed that the same structure underlies each social and cultural institution of any particular society; its kinship system, the layout of its campsite, its art style, mythology and everything else. What was necessary to demonstrate was that cadastrial documents hold no authority over his subjective envisioning of the territorial lay out, which, in his mind, clearly showed that the two fruit trees were rooted in Strauss’ soil, drinking Strauss’ water, and thus produced Strauss’ fruit.â€

“Lévi-Strauss at this point in his career had proposed an extremely ambitious version of the functionalist program to show not only how the various institutions of a particular society hang together, but to demonstrate that they were all were workings out of the same underlying code.”

“In “The Elementary Structures of Kinship”, Lévi-Strauss made a move toward seeing structure as a language; he argued that the exchange of marriage partners, was not only a rule-generated structure but a system of communications. Women sent as wives from one family to another are messages from family to family, from man to man. Although not on friendly terms, the only man he communicated with at this moment, was his neighbour, and in their fights over the two fruit trees they had found a different means of exchanging messages.

There is an uprising of lines, dots, compasses, borderlines.
Puppet versions of neo structuralist thinkers dance on unmapped terrain.
Sun beams over the bright orange seats.
A mini bar service speeds back and forth through the pathway, criticly analysed by Randall Collins, Erving Goffman and several other gardeners proclaiming feedback intensification through rhytmic entrainment while planting trees in the middle of our train coach in an orderly fashion.
A phone rings, fruit drops, pages turn.

You are here, Personal geographies and other maps of the Imagination,Katherine Harmon, PA press