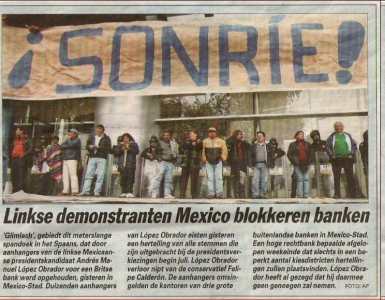 There is no category old news on this blog, but this image would definitely qualify: found stuck in between pages of a two year old agenda.
Depicted is a loose protest in Mexico -city against the outcome of the elections in august 2006, supporters of Andres Manuel Lopez Obrador demanded a re-counting of the votes. They surrounded three big foreign banks, claiming that they “ransack the country” and “widen the barrier between rich and poor” and because, supposedly, these banks had participated in the politics of the country supporting the PAN candidate Felipe CalderÃ³n. The protestors put up banners with the text ‘Smile!’