ABS – In God we trust

I am in Paramaribo to look at how different languages are used. I am particularly interested in the relation between Dutch, being the national language, and Sranan which is the language most people speak. The goal is to look at comparative cases that will help to develop new methodologies for working in between language groups in Brussels, as in for example the previous language projects Parlez-vous Saint-Gillois? and De Schaarbeekse taal. As part of my five week stay, I roam the city to note and photograph language in public space. How is language choice, variation and diversity at play in official announcements, in commercial and individual notes, in how people speak to each other? 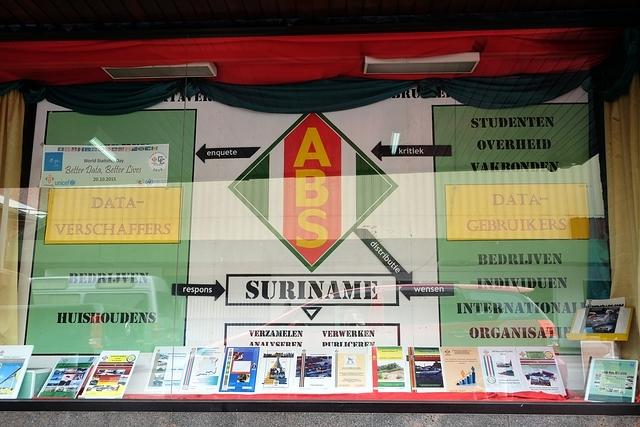 The Algemeen Bureau voor de Statistiek, or ABS (General Office for Statistics) has its headquarters on the Klipstenenstraat 5 in Paramaribo. A window display visualises the workflow logics of the ABS, see the image above.
In the middle we find the logo of the ABS surrounded by the national colours of Suriname. In the left green column we have the ‘data providers’ (government, enterprises and households). The ABS inquires (enquete), their ‘responses’ are outputted to the square Suriname.
The fallen ‘distribution’ arrow, was presumably meant to indicate that information is distributed to the parties mentioned in the right hand green column, the ‘data users’ (students, government, unions, enterprises, individuals, organisations) Their wishes are uttered to the Suriname square, critique is funneled back to ABS, which completes the circle.

Then the data and wishes that were put into the square are collected, analysed, processed and published. Prove of this is a selection of the publications of the ABS that are displayed underneath the graphics.

A slogan pasted on the window itself reads: 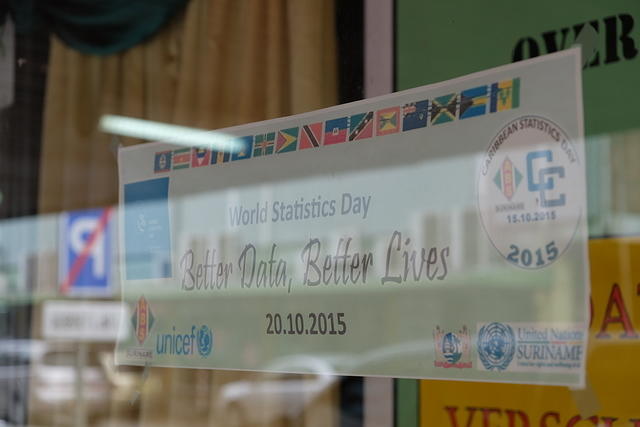 The Algemeen Bureau voor de Statistiek in Suriname is a ‘continuously learning organisation that effectively functions as coordinator and important producer of adequate statistics inside the National Statistic Sytem of the Republic of Suriname.
Its mission is to supply the Surinamese and international community with sound statistics that give insight in the demographical, economical and socio-cultural situation and developments in Suriname.
Its core values are: Servitude, impartiality, expertise, integrity, quality, team-spirit. All this under the beautiful motto:

Statistical Thinking will one day be as necessary for efficient citizenship as the ability to read and write.

Translated from the ‘vision and mission’ page of the ABS
http://www.statistics-suriname.org/index.php/stichting-abs/missie-en-vissie 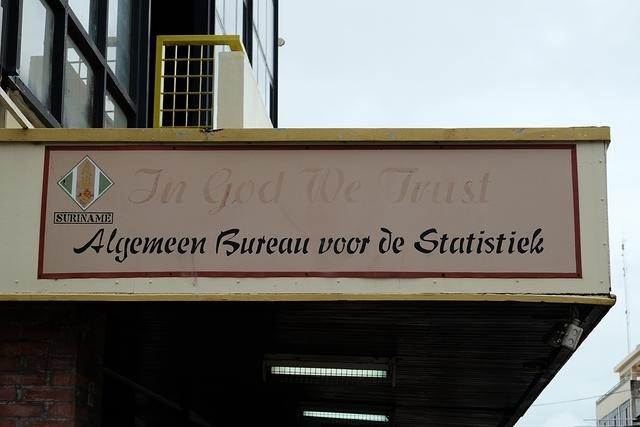 The name of the bureau as can be read on the facade of the building is headed with the words “In God we trust“. The combination between religious faith and a statistics institute might not seem the most obvious. But much is explained when one reads the news feed on the ABS website. A small report records the ‘sober commemoration’ of its 70 years existence. Here’s a translation:

On Januari 1 2017, the Algemeen Bureau voor de Statistiek (ABS) existed for 70 years. Because of the precarious situation, the 70th birthday of the ABS has passed almost unnoticed. The planned commemorative activities have in any case been started in suitable manner by a ceremony with the ABS personnel in the meeting room of the ABS on January 5 2017. The ceremony has been made possible by the spontaneous donations pf the employees of the ABS and their families.

During these commemorative ceremonies three religious leaders have begged the Almighty to bless our beloved statistics office. In their pleas all three spiritual leaders have emphasised the importance of a Statistics Office and of good, reliable statistics for among others policy ends.
They pointed out that the ABS has to provide the Surinamese and international community with sound statistics about Suriname, but that this service is threatened by the financial economic situation in our land.

This task of the Office is indeed continuously made difficult by the late transfers of the delimited subsidies.
Despite this situation, the majority at the ABS is continuing to do their best.
It stays important to stimulate the awareness for qualitative good (among others: relevant, reliable, up to date and punctual) statistics. In his speech, the director made clear that the ABS, thanks to the Almighty, despite all the problems, has for the larger part remained able to continue and he expressed his admiration for the employees.